While the fruit from this genus is dry and uninteresting in some species, in many others it is sweet and juicy. 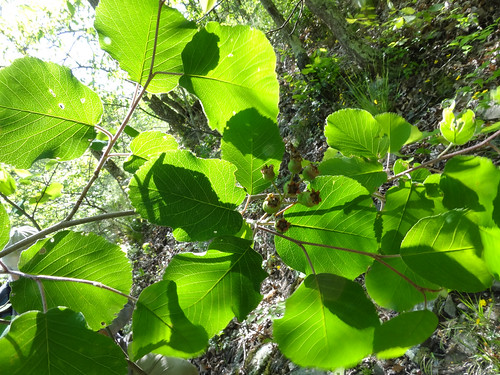 Roundleaf serviceberry (Amelanchier sanguinea) is a shrub or small tree. The leaves are alternate, simple, deciduous, and coarsely-toothed on the margin. The flowers, which have five white petals, are grouped in small clusters that appear from late April to mid May. The fruits resemble miniature apples and are reddish to purple when mature. Identification of this species must be done with care because of its resemblance to other serviceberries.

Roundleaf serviceberry has been given a status of Endangered on the Plants of Special Concern in Pennsylvania list by the Pennsylvania Biological Survey and the Department of Conservation and Natural Resources, based on the relatively few historical and recent records that have been documented in the state.

It is known historically and currently from several northern or mountainous counties in Pennsylvania.

The species is unlikely to be noticed except during the brief flowering period in the spring of the year. More field work is needed in order to determine if this status is justified. The plant may have been overlooked because its habitat is not always easily accessible and because of difficulty of identification.