This species is poisonous at low toxicity if it is eaten, and skin may become irritated if it is touched. Symtoms may include burning mouth, abdominal pain and vomiting. 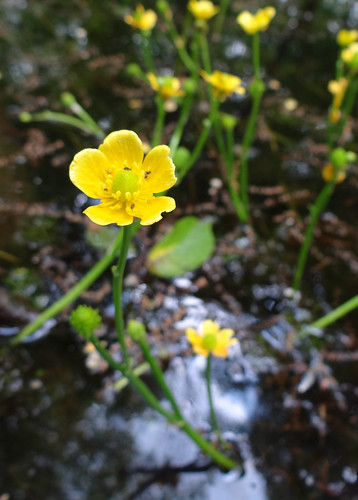 Yellow water crowfoot (Ranunculus flabellaris) is an aquatic perennial that usually grows submersed in water. Its floating stems are 30-70cm long and can root to the ground at their lower nodes. This species belongs to the buttercup family. The leaves are mostly submersed. Submersed leaves are finely dissected and have a bushy, feathered appearance. Those that are emergent have three lobes and are roughly kidney shaped in outline. The flowers resemble buttercups and are held above the water's surface singly or in small clusters. Flowers bloom in May and have five to eight shiny, yellow petals that are 7-15mm long. The small seed-like fruits have a curved beak on one end.

The PA Biological Survey considers the yellow water crowfoot to be a species of special concern, based on the relatively few confirmed occurrences and the specialized wetland habitat. It has been a signed a rarity status of Threatened.

It can be found growing in the shallow water of slow streams, marshes, and ponds or growing on their muddy shores.

Conservation of yellow water crowfoot will depend upon the protection of existing populations and maintenance of their wetland habitat. This may include removing invasive plants and creating buffers to help protect populations from the effects of run-off or flooding. Sustaining appropriate water levels will also be important for maintaining high quality habitats.