This species of larkspur blooms later than most others. 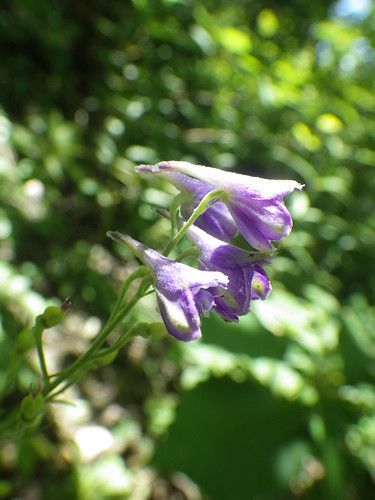 Tall larkspur (Delphinium exaltatum) and other larkspurs have distinctive flowers with four blue petals and one sepal elongated into a slender spur, which gives the plant its name. The leaves are deeply lobed into irregular segments. Our two native larkspurs can often be distinguished by the difference in their height at blooming periods. Tall larkspur blooms in late summer and grows 1.5-2m tall, while dwarf larkspur (Delphinium tricorne), which blooms in early spring, grows to only less than a meter in height.

Of the 8 historically recorded plant sites, only one has been located. Most museum records do not contain specific directions, so extensive surveys are needed to search all possible sites. Two additional locations have been found by searching suitable habitat. Tall larkspur is considered a species of concern throughout its natural range and is listed as Endangered in Pennsylvania, Missouri, North Carolina and Tennessee. Surveys of historically known locations must be continued.Owners of known sites should be encouraged to protect the plants. Penn DOT and other environmental assessments will help avoid impacts from road construction. In February 1990 tall larkspur was classified as a candidate for federal listing by the United States Fish and Wildlife Service.