The flower spires of this species can help add architectural height to shaded borders, shade gardens, or other naturalized areas when landscaping. 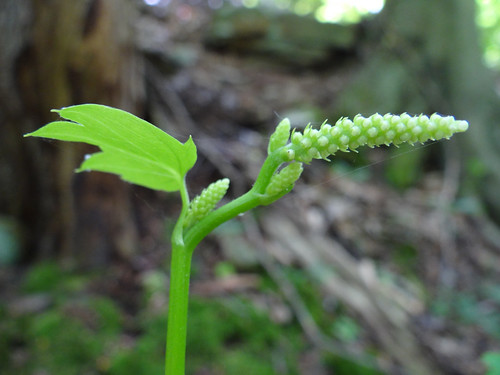 American bugbane (Actaea podocarpa) is a perennial herb that grows from 1-1.5m tall.

American bugbane grows in rich hardwood forests, often in the same habitat as hemlock, on north-facing mountainsides or the wooded corridors that follow mountain streams.

American bugbane is primarily endangered by development of its habitat, but populations have also suffered from harvesting pressure. Although mountain bugbane is not particularly valuable in itself, its similar-looking relative, black bugbane, is a highly sought-after medicinal herb. Between 300,000 and 500,000 pounds of black bugbane were collected from the wild for sale in 1999, and some of this was almost certainly mountain bugbane.

Much is still unknown about where American bugbane grows and how secure its existing populations are. Information about how often it is collected with black bugbane would greatly aid conservation efforts. Given present information, habitat conservation is what this species needs most.