The young leaves of this species can be eaten in either a raw or cooked manner. 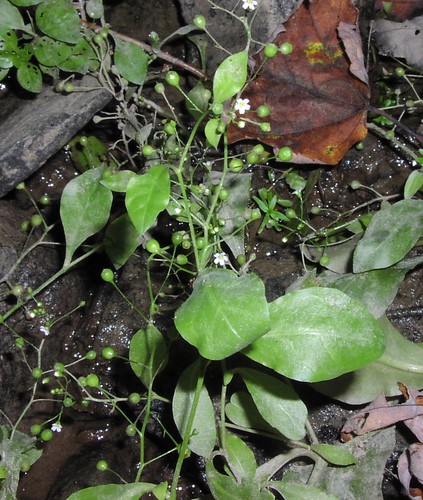 Water pimpernel (Samolus parviflorus) is a small perennial herb, up to 30cm tall, that has several upright, branching stems. This wetland species is a member of the primrose family. The leaves grow at the base of the plant and along the stem in an alternate arrangement. They are oval in shape, have smooth margins, and taper toward the base to a petiole. The leaves are light green and about 7cm long. The flowers are held in a large, open, spike-like cluster at the top of the stem. Parviflorus means “small flowered” and this plant is appropriately named, with flowers only about 3mm wide. Flowers have five white, petal-like lobes and bloom from June to October.

The PA Biological Survey considers the pineland pimpernel to be a species of special concern, based on the relatively few occurrences that have been documented and the wetland habitat.

In Pennsylvania it grows in seeps and on muddy stream banks, particularly those underlain by diabase.

Conservation of water pimpernel will depend upon the protection of existing populations and maintenance of their wetland habitat. This may include removing invasive plants and creating buffers to help protect populations from the effects of run-off or flooding. Sustaining appropriate water levels will also be important for maintaining high quality habitats.