Neighboring state New York has the greatest number of populaitons in the country and some of the largests populations of this species in the world. 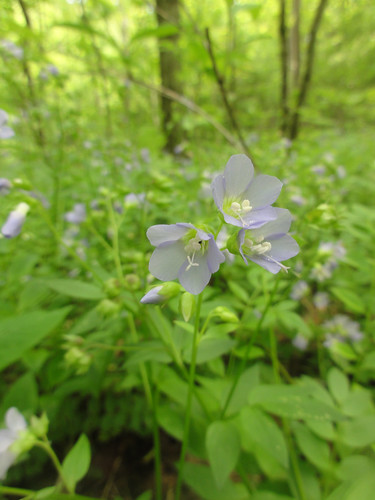 Jacob's ladder (Polemonium vanbruntiae) is a perennial herb up to 1m in height. The leaves are alternately arranged and divided into numerous leaflets with entire margins. The individual flowers, appearing in late June and early July, have blue petals and protruding stamens and style. The fruit is a many-seeded capsule. A more common and widespread species, Polemonium reptans, is similar but is smaller in size, has the stamens and style not protruding from the flower, has more of a woodland habitat, and blooms in spring.

The Jacob's ladder has been given a status of Endangered on the Plants of Special Concern in Pennsylvania list by the Pennsylvania Biological Survey and the Department of Conservation and Natural Resources, based on the relatively few populations that have been documented in the state. It is considered a globally rare species by the Natural Heritage Program.

The species grows in wet soil in woods, thickets and openings.

It is known historically from several widely scattered occurrences in Pennsylvania, although all of the currently known populations are in the northeastern part of the state.