A few other species resemble this plant, but its defining feature of alternate leaves instead of opposite leaves help define it from the look-alikes. 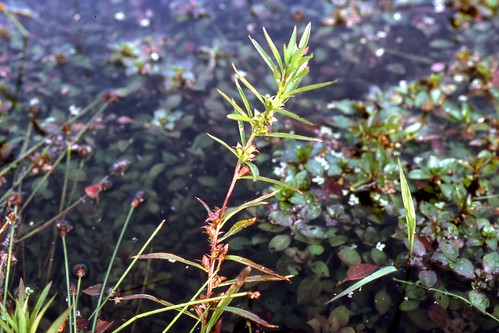 False loosestrife (Ludwigia polycarpa) is a perennial herb with erect or trailing, foursided stems that can grow up to 1m long. The leaves are alternately arranged, lance-shaped or linear, untoothed on the margins, stalkless, and up to 12cm long. The flowers, appearing from July to September, occur in the leaf axils. The petals are absent or minute. The most distinctive feature of the plant is the four-sided capsular fruit, which has four sepal lobes at its summit and two narrow leaf-like bracts at its base.

The PA Biological Survey (PABS) considers false loosestrife to be a species of special concern, based on the very few occurrences that have been recently confirmed, its restricted state range, and its wetland habitat. It has a PA legal rarity status and a PABS suggested rarity status of Endangered. Only a few populations are currently known from the state.

It grows on shorelines and in wet depressions and marshes.

In Pennsylvania, it appears to be at an eastern border of its
range and has been found in a few counties along the Susquehanna River.

Threats to the species include natural succession and invasive species.

The populations of false loosestrife currently known from the state are located either in or in close proximity to the Susquehanna River. The viability of the species and its habitat can be enhanced by maintaining the natural seasonal fluctuations in the water level of the river and the natural conditions of its shoreline and islands.