The more woody species of promroses are great browse for deer, goats sheep and cattle, so this species is rarely found in overgrazed pastures. 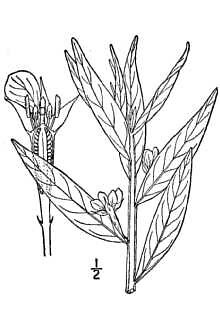 Upright primrose-willow (Ludwigia decurrens) is an annual herb with hairless, square stems that may grow up to 2m tall. The leaves are alternately arranged, lance-shaped or linear, and the margins are untoothed. The leaf bases extend downward along the stem and create a raised line or “wing.” The flowers, appearing from July to September, are about 2.5cm in width and have four yellow petals and eight stamens. The fruit is a many-seeded capsule that is more-or-less four-sided. Despite its common name, the plant is not a true willow but a member of the evening-primrose family.

The PA Biological Survey (PABS) considers upright primrose-willow to be a species of special concern, based on the single occurrence that has been confirmed, its very small state range, and its wetland habitat. It has a PA legal rarity status and a PABS suggested rarity status of Endangered. At present, it is only known from Lancaster County.

it inhabits shoreline areas of the Susquehanna River.

In Pennsylvania, it reaches the known northern limit of its range and has been found only in Lancaster County

Invasive species represent a threat to its habitat.

Upright primrose-willow is a southerly species that appears to be expanding its range to the north. It was first documented in Pennsylvania in 1987 and may become more frequent in the state in the future. The viability of the single known occurrence can be enhanced by maintaining the natural seasonal fluctuations in the water levels and the natural condition of the shoreline and islands of the Susquehanna River.