The bark tincture was widely used by physicians in the late 19th century to relieve congestion of glandular organs. 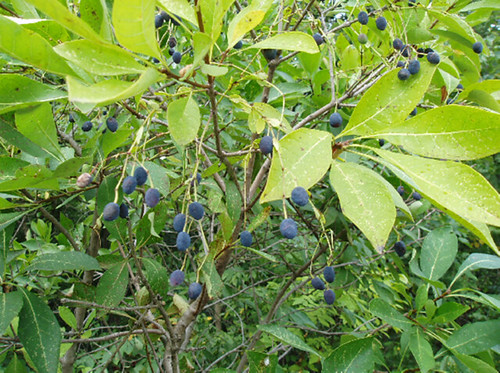 Fringetree (Chionanthus virginicus) is a deciduous shrub or small tree that can grow up to 10m tall, but is usually much smaller in Pennsylvania. The leaves are oppositely arranged, oval to elliptic in shape, usually 8-15cm long and 3-8cm wide, and have untoothed margins. The white flowers, which appear in May, are grouped in clusters. The flowers have four petal-like lobes, which are elongate, narrow, and have a fringed appearance. Flowers of this species are unisexual, with male and female flowers being produced on separate plants, so only female plants produce the dark blue, one-seeded fruit that matures in the fall.

The PA Biological Survey (PABS) considers fringetree to be a species of special concern, based on the relatively few occurrences that have been recently confirmed. It does not have a PA legal status, but has been assigned a suggested rarity status of Threatened by PABS. About twelve populations are currently known in the state.

The species grows in moist woods and along streams, and is also cultivated as an ornamental.

In Pennsylvania, it is near the northern border of its range, and has been documented historically from numerous southern counties.

This species may have declined in abundance from historical levels due to loss of its woodland habitat, invasive species, and excessive deer browsing.

The viability of existing populations of fringetree and its habitat may be enhanced by creating buffers around fragmented forests and controlling invasive species.