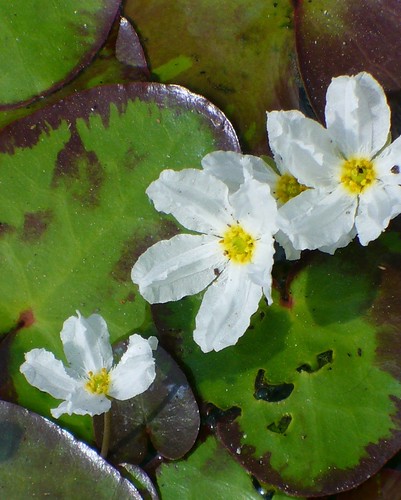 Floating-heart is an aquatic herb that resembles a miniature waterlily. The basal part of the plant is anchored in the substrate of the lake or pond. A long stalk is produced, sometimes many feet in length, which produces a single heart-shaped floating leaf on the surface of the water. The leaf may be up to 7.5 cm in width, with a deeply-incised base, and often becomes reddish tinged in age. In some individuals, the long stalk from the base of the plant may also produce a group of tuberous roots and/or a cluster of flowers, and the roots, flowers, and leaf appear to be attached at the same point on the long stalk. The white or creamy flowers, which appear in summer, project above the water surface, are individually about 5-10 mm in width and have a 5 lobe-like appearance, with each petal-like lobe having a yellow gland at its base. The fruit is a many-seeded capsule about 4 mm in length.

The species grows in lakes and ponds.

Floating-heart ranges from Newfoundland to Ontario and south into the Gulf Coast states. In Pennsylvania, it has been documented historically in a few northeastern counties.

The viability of populations of Floating-heart and its habitat may be enhanced by creating buffers and protecting the natural hydrology around lakes and ponds, controlling invasive species, and avoiding indiscriminate use of aquatic herbicides.