This species has been studied to evaluate its potential as an energy crop that could be grown on a sandy soil combined with fertilizer to increase biogas production. 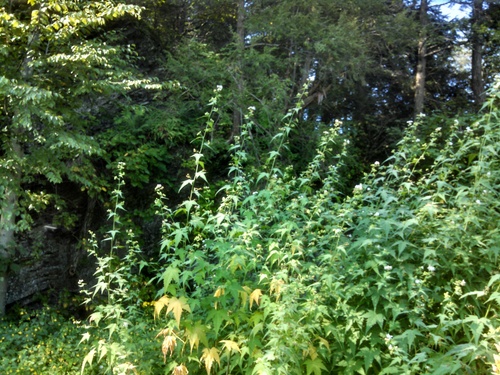 Virginia fanpetals (Sida hermaphrodita) is a large perennial herb that grows 1-3m tall. Its stems are hairy when young but become smooth with age. The leaves grow alternately on the stem and resemble long-pointed maple leaves. They usually have three to seven irregularly toothed lobes, with the middle lobe being the longest. The white flowers, which bloom from July to October, are arranged in stalked clusters that grow from the upper stem leaf axils. Each flower has five petals that are each about 8mm long.

The PA Biological Survey considers Virginia fanpetals to be a species of special concern, based on the relatively few occurrences that have been confirmed and the localized distribution in the state, as well as rarity throughout its global range. It has been assigned a rarity status of Endangered.

The species grows on streambanks and bottomlands, as well as disturbed places like roadsides and railroad grades that are in proximity to the stream corridors.

In Pennsylvania, the occurrences are restricted to the Juniata River and lower Susquehanna River watersheds.

Maintenance of known populations and preservation of the unique habitat where Virginia fanpetals thrives will be crucial to its survival. Removal of encroaching invasive species along river corridors and the establishment of buffers surrounding known sites will help to improve habitat quality. Recognition and protection of populations along roadsides and in other unprotected areas will also be important.