This species can be recognized by the blue-white underside of its leaves and lemon scented flowers. 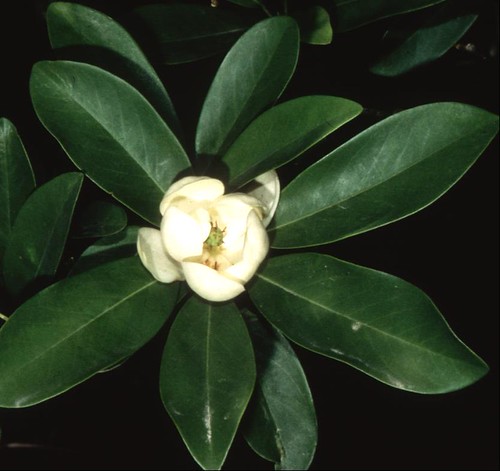 Sweetbay magnolia (Magnolia virginiana) is a semi-evergreen tree that is often multistemmed and may grow to 20m tall, but in Pennsylvania is usually much smaller. The leaves are alternately arranged, thickish in texture, untoothed on the margin, noticeably whitish on the lower surface, elliptic in shape, and from 7.5-13cm long. The fragrant white flowers, appearing in May and June, are relatively large and showy, approximately 5-7.5cm wide. The fruit is a 5cm cone-like structure containing seeds that have a red or orange outer covering.

The PA Biological Survey (PABS) considers sweetbay magnolia to be a species of special concern, based on the few occurrences that have been recently confirmed, its limited state range, and its wetland habitat. It has a PA legal rarity status and a PABS suggested rarity status of Threatened. About twenty populations, most with few individuals, have been documented in the state.

It occurs in wetlands, particularly swamps and seepy woodlands.

In Pennsylvania, it represents a southerly species and has been documented in several southeastern counties.

Excessive deer browse may be threat in some locations.

The viability of populations of sweetbay magnolia and its habitat type will be enhanced by creating buffers around wetlands, controlling invasive species, and protecting the hydrology of the wetland and its surroundings. Populations of sweet bay magnolia occurring west of the Coastal Plain in the state have significance for plant geography and possibly for genetic diversity.