There are over 125 species of magnolia in eastern North America, and they are among the most ancient of the flowering plants - fossil records date back more than 100 million years. 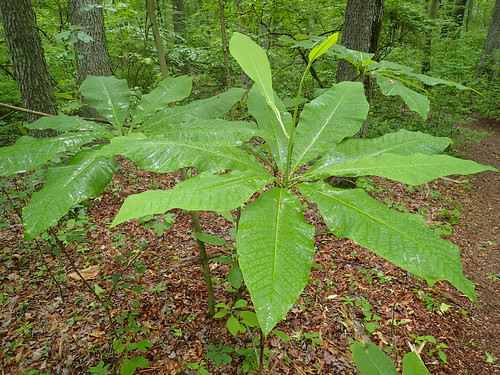 Umbrella-tree (Magnolia tripetala) is a small deciduous tree that often has several trunks and grows up to 10m tall. The leaves are alternate, untoothed on the margin, conspicuously large (up to 60cm long), oval to oblong in shape, and usually clustered at the ends of the stout branchlets. The flowers, appearing in May, have large, showy, white petals that are up to 14cm long. The fruits are aggregated in a 7-12cm cone-like structure, with the enclosed seeds having an orange or red outer covering.

The PA Biological Survey (PABS) considers umbrella-tree to be a species of special concern, based on the few occurrences that have been recently confirmed. It has a PA legal rarity status of Threatened and a PABS suggested rarity status of Rare. About twenty-five occurrences have been documented in the state.

It grows on rich wooded slopes, wooded streambanks, and in moist ravines. The species has also been cultivated in locations (e.g., the Philadelphia area) that are believed to be outside its natural range in the state, and has escaped from these plantings to woodlands.

Flowers in May with the leaves; cone-like fruit structure year-round

In Pennsylvania, it reaches a northern border of its natural range, and has been documented in several southern counties.