Between the sepals of this species there is an appendage that folds outward. This creates the tooth-like rim around the top part of the flower. 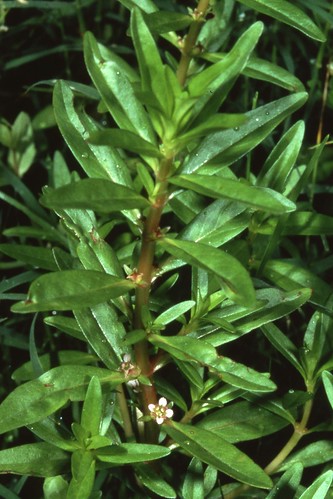 Toothcup (Rotala ramosior) is a small annual herb that has smooth stems that may grow up to 30cm in height, but in some cases may be less than 2.5cm . The leaves are oppositely arranged, stalkless, averaging about 2.5cm long, untoothed, generally elliptic in shape with a rounded tip and tapering base. The flowers, appearing from July to September, are located in the leaf axils. Each flower has four light pink or whitish petals, which tend to fall off early. The fruit is a many-seeded capsule that is about 3-5mm long and usually becomes red in color as it matures.

The PA Biological Survey (PABS) considers toothcup to be a species of special concern, based on the relatively few occurrences that have been recently confirmed and its wetland habitat. It has a PA legal rarity status and a PABS suggested rarity status of Rare. About thirty populations are currently known from the state.

In Pennsylvania, it has been documented historically in numerous southern counties, particularly along the Susquehanna River.

The populations of toothcup that occur along streams and rivers can be enhanced by maintaining the natural seasonal fluctuations in the water level of the stream and the natural conditions of its shoreline. Despite its somewhat narrow habitat requirements, this species appears to be fairly successful in reproducing itself and colonizing new areas.