Another common name for this species is scarlet toothcup because of the shape of the flowers. 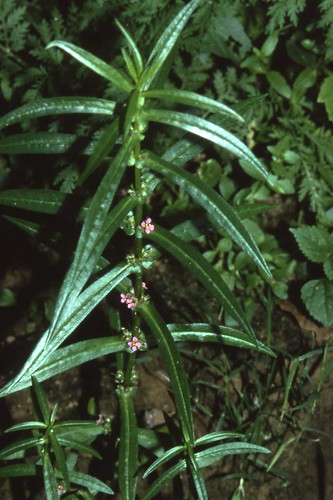 Toothcup (Ammannia coccinea)  is an erect or spreading, sometimes branched, annual herb with stems up to 60cm high. The leaves are opposite, stalkless, lance-shaped or linear, over 6cm long, and pointed at the tip. The flowers, appearing from July to September, occur in small clusters that are subtended by the upper leaves. The individual flowers are small and inconspicuous, and have four deep-pink petals. The fruit is a manyseeded capsule.

The PA Biological Survey (PABS) considers toothcup to be a species of special concern, based on the few occurrences that have been recently confirmed. It has a PA legal rarity status of Endangered and has been assigned a suggested rarity status of Threatened by PABS. Fewer than ten populations, mostly along the lower Susquehanna River, are currently known from the state.

Toothcup grows in various damp to wet habitats, especially on the shorelines of rivers, streams, and ponds, and may also be found in human-created disturbances that simulate natural habitats.

In Pennsylvania, it has been documented historically mostly in the southeastern counties, particularly along the lower Susquehanna River.

Invasive species represent a threat to scarlet ammannia and its shoreline habitat.

The viability of populations of toothcup and its habitat depends on maintaining the natural hydrology and natural condition of the shoreline and islands of the Susquehanna River. This species appears well-adapted to the seasonal fluctuations in water levels, especially the lower water levels of summer and fall when the plant is flowering and fruiting.