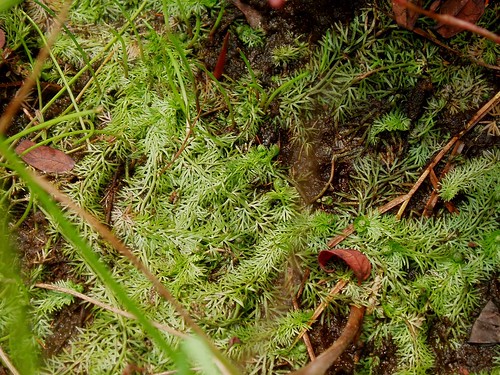 Bladderworts are herbaceous carnivorous plants, mostly aquatic, that have small bladders, usually attached to their finely divided leaves, which trap and digest tiny animals. Flat-leaved Bladderwort differs from most of its relatives in that it produces leafy creeping and prostrate stems on exposed peat, and that the leaves, although divided into narrow and forking segments, are wide enough to have an obviously flattened surface and have minute teeth along their margins. Also unlike most bladderworts, this species has the bladders not attached directly to the leaves but located on specialized leafless stems that branch off the leafy stems and that may grow to 15 cm in length. The yellow flowers, appearing from July to August, number from 1 to 4 and are alternately arranged on an erect stalk. Each individual flower has a two-lipped appearance, with the 8-11 mm lower lip about twice as long as the upper lip. The lower lip also has a spur-like projection at the rear.

Flat-leaved Bladderwort has a transcontinental range across the cooler regions of North America. In Pennsylvania, this species has been documented historically mostly in the northern, especially the glaciated northeastern, counties.

The viability of populations of Flat-leaved Bladderwort and its habitat may be enhanced by creating buffers and protecting the natural hydrology around wetlands and controlling invasive species. This plant is often an indicator species for bog habitats that feature various orchids, carnivorous plants such as sundew, bladderwort, and pitcher plant, and other interesting species.