The common name for this species, skullcap, comes from the shape of the calyx located at the base of the flowers - it resembles a medieval helmet. 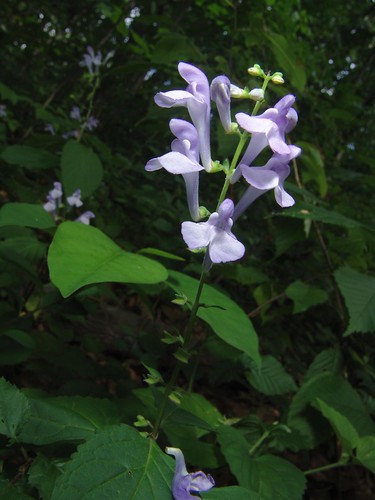 Showy skullcap (Scutellaria serrata) is a perennial herb that grows up to 60cm in height. The leaves are oppositely arranged with a well developed stalk, toothed on the margin, more-or-less hairless, broadly lance-shaped to egg-shaped, pointed at the tip, and 5-10cm in length. The blue flowers, appearing in May and June, are arranged in pairs at the top of the stem. The individual petals are fused into a tube-like structure that is about 2.5cm in length. The common name refers to the cap-like appendage that is present on the calyx of the flower. Although a member of the mint family, this species does not have the characteristic odor often found in that family.

The PA Biological Survey considers showy skullcap to be a species of special concern, based on the relatively few occurrences that have been recently documented and small state range. It has a PA legal rarity status of Extirpated, but has been assigned a suggested rarity status of Endangered by PABS. Fewer than five populations are currently known from the state.

It grows in moist woods and on floodplains and rich slopes.

In Pennsylvania, it has been documented historically in a few southeastern counties.

The known populations of showy skullcap have threats from habitat loss, invasive species, and in some locations, excessive browsing by deer.

Establishing buffers around fragmented forested habitat and removal of invasive species will help to maintain populations. This species is very attractive in flower and may be subjected to picking or digging by gardeners.