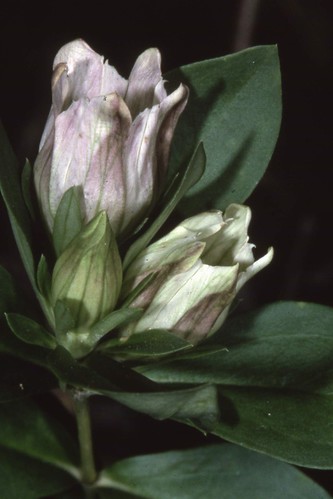 Striped gentian (Gentiana villosa) is a perennial herb that usually grows from 20-60cm tall. The leaves are oppositely arranged, untoothed on the margin, hairless or nearly so, elliptic to widest above the middle, and two and a half to ten centimeters long. The flowers, appearing in September and October, occur in dense clusters at the top of the stem. The petals are whitish-green (often tinged with purple), 2.5-5.5cm long, and are fused for most of their length into a sac-like structure. The fruit is a many-seeded capsule.

The PA Biological Survey (PABS) considers striped gentian to be a species of special concern, based on the very few occurrences that have been recently confirmed and the specialized habitat. It has a PA legal rarity status of Undetermined and has been assigned a suggested rarity status of Endangered by PABS. Fewer than five populations are currently known from the state.

In Pennsylvania, it occurs at a northern border of its range, and has been documented historically mostly in the southeastern counties.

The populations of striped gentian in the state are threatened by human-related habitat loss, natural succession, invasive species, and excessive deer browsing.