Galls produced by the tree are astringent and can be used in treating haemorrhages, dysentery, diarrhoea and more. 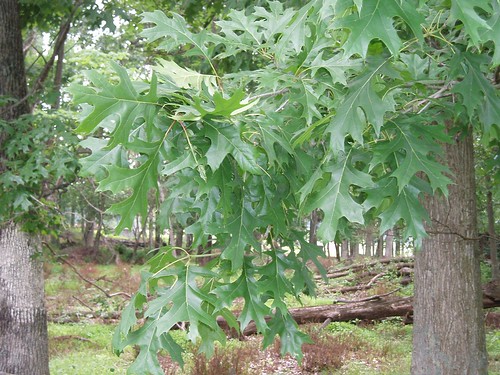 Shumard oak (Quercus shumardii) is a large, deciduous tree that reaches up to 30m in height. It has gray, furrowed bark and grayish-brown, dull, bud scales on the mature branchlets. The leaves are alternate and deeply lobed. Each leaf has seven to nine sharply toothed lobes that tend to widen slightly toward the tip. The 10-18cm leaves are dark green above, and paler green below with hairs clustered in the leaf axils.

The PA Biological Survey considers Shumard oak to be a species of special concern, based on the relatively few occurrences that have been confirmed. It has been assigned a rarity status of Endangered.

The species grows in moist to wet woods along streams, bottomlands, and lower slopes, often on calcareous substrate.

In Pennsylvania, it has been found in the south-central and northwestern counties.

Maintenance of known populations and preservation of the communities where Shumard oak grows will be crucial to its survival. Creating buffers around fragmented habitat and removal of invasive species will help to maintain populations and encourage new population growth. The management of the known sites requires long term monitoring of populations. Potential sites for restoration should be evaluated.