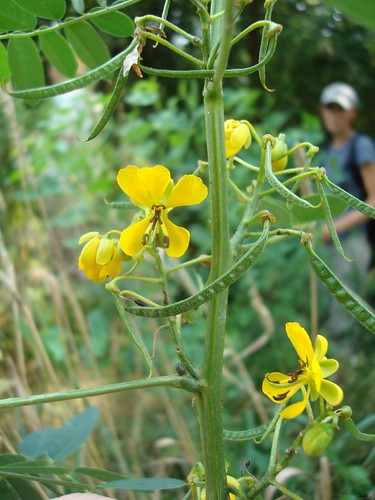 Wild senna (Senna marilandica) is an erect, bushy perennial herb that can grow up to 2m tall. The leaves are alternate, have dome-shaped gland near the base of the leaf stalk, and are divided into four to eight pairs of oblong to elliptic leaflets. The flowers are yellow, appear in July, and are up to 2.5cm wide, with five yellow petals and ten dark-red stamens. The fruit is a flattened pod marked with distinct segments.

The PA Biological Survey considers the wild senna to be a species of special concern, based on the relatively few occurrences that have been documented. It has a proposed rarity status of Rare.

It grows in a variety of habitats, including clearings, woods borders, road banks, open slopes, and in thickets.

Wild senna has a distribution from New York west into Nebraska and south into Florida and Texas. In Pennsylvania, the occurrences are well distributed in the state.

Wild senna will benefit from protection of its habitat and of known populations. Removal of overgrowth and invasive species with the integration of fire regimes, when appropriate, will help to preserve the integrity of the sites.