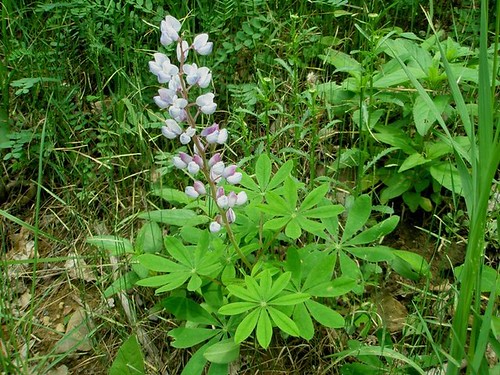 Lupine is a perennial herb with a hairy or hairless erect stem that may grow to 0.6 m in height. The alternately arranged and long stalked leaves have a very distinctive appearance, with the blade portion having 7-11 leaflets that radiate outward from a central point at the tip of the leaf stalk. The individual leaflets vary from hairless to hairy, are untoothed on the margins, and tend to be widest toward the bluntish tip. The attractive flowers, which appear mostly in May and June, are aggregated in an elongate cylindrical cluster on the middle and upper part of the stem. The flowers tend to be some shade of blue, but may be entirely white or pink, and average about 12-16 mm in length and have a pealike appearance. The fruit consists of a hairy pod-like somewhat flattened capsule up to 5 cm in length, and contains several seeds.

Lupine ranges from New England to Minnesota and south into Florida and Texas. In Pennsylvania, it has been documented historically in many widespread counties.

The viability of populations of Lupine and its habitat may be enhanced by avoiding the indiscriminate use of herbicides. Active management, such as mowing or invasive species removal, may be required in order to maintain populations.