Epidemics of lathyrism due to over ingestion of this spcies date back to ancient Greece, but this was mostly during times of famine. 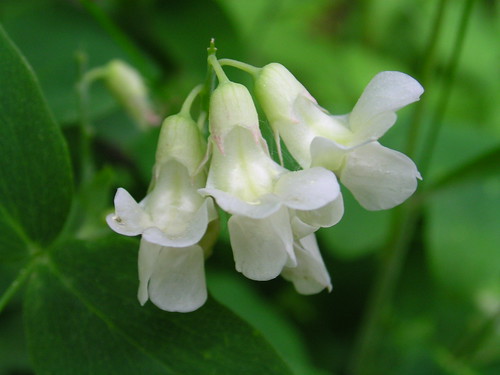 Wild pea (Lathyrus ochroleucus) is a perennial herb with sprawling stems. The leaves are alternately arranged, divided into four to eight hairless, entire leaflets with a branching and twining tendril at the tip. The flowers are whitish or yellowish-white and appear in May or June. The fruit is a pea-like pod.

The wild pea has been given a status of Threatened on the Plants of Special Concern in Pennsylvania list by the Pennsylvania Biological Survey and the Department of Conservation and Natural Resources, based on the relatively few recent records that have been documented in the state. More field work is needed for this species in order to determine if this status is justified.

The species grows in woods, thickets, and openings in well-drained, usually calcareous, substrate.

It occurs in the northern or mountain counties in Pennsylvania.