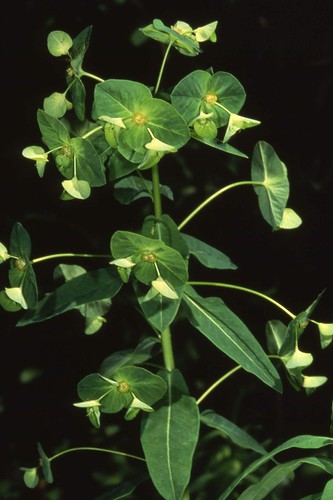 Glade spurge (Euphorbia purpurea) is a stout perennial that grows up to 1m in height. It sprouts from a rhizome, a thick underground stem. Like other spurges, it has a milky sap that deters herbivorous animals and insects.

The preferred habitat is cool, moist woods, usually along streams, in seeps, or in swamps.

In Pennsylvania it is found in the limestone wetlands of the Ridge and Valley province.

Much of the intact habitat where glade spurge occurred historically has been cleared for agriculture. Currently, there are about fifty populations known to exist in seven states, making it endangered throughout its range. Recent threats to glade spurge populations include the filling and draining of wetlands, logging, overgrazing by deer and livestock, and human recreational activity such as off-road vehicles and hiking.

Maintenance of healthy glade spurge populations will require management of known populations, maintenance of seepage and hydrological integrity, and protection of wetlands throughout the range. This will include monitoring known population occurrences, maintenance or improvement of water quality in those habitats, removal of invasive species, and protection from grazing. The preservation of immediate intact habitat as well as the hydrologic features feeding the habitat should be considered. There may also be a possibility for restoration projects in some areas.