This species is great for gardens to stabilize slopes or provide a foundation for large shrubs. 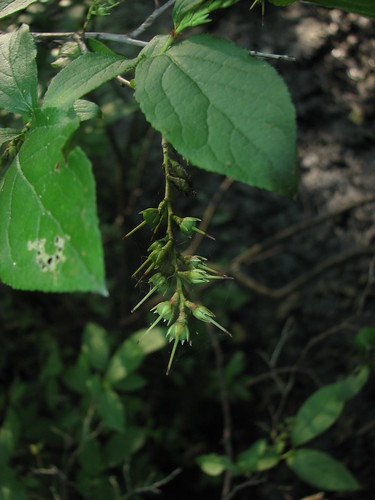 Swamp dog-hobble (Leucothoe racemosa) is a deciduous shrub or small tree that may grow up to 3m in height. The leaves are alternately arranged, sharply toothed on the margin, egg-shaped to elliptic, pointed at the tip, usually more-or-less hairy on the veins below, and typically three to 8cm in length. The white flowers, appearing in May or June, are grouped in slender, elongate clusters, with all the flowers tending to point to the same side. The individual flowers, about 7-9mm in length, have a tubular or bell shape. The fruit is a globe-shaped, many-seeded capsule.

The PA Biological Survey considers swamp dog-hobble to be a species of special concern, based on the relatively few occurrences that have been recently documented and the wetland habitat. It has a PA legal rarity status of Undetermined and a PABS suggested rarity status of Threatened. About thirty populations are known from the state.

It grows in wetlands, particularly swamps, wet thickets, and the margins of ponds and streams.

In Pennsylvania, it represents a southerly species and has been documented historically in numerous southeastern counties.

The viability of known populations of swamp dog-hobble and its habitat may be enhanced by establishing buffers around wetlands, controlling invasive species, and protecting the natural hydrology surrounding wetlands.