This species makes Labrador tea, which has been used historically for colds, skin complaints and malignancies. 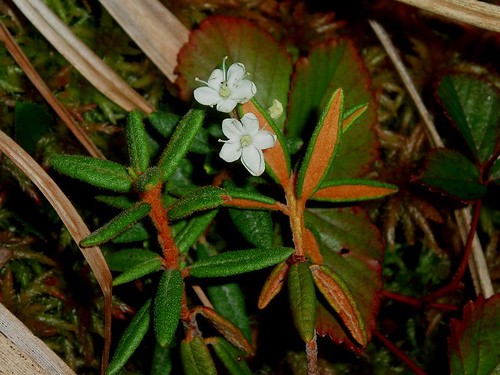 Labrador tea (Ledum groenlandicum) is an evergreen shrub with dense, orangish or brownish, woolly hairs on the branchlets. The leaves are thick and leathery, tend to have the margin curled under, and have abundant orangish or brownish (or whitish when young), woolly hairs on the undersurface. The white flowers have five petals and appear in May or June. The fruit is a cylindrical-shaped capsule. The species is easily recognized at any time of the year.

Labrador tea has been given a status of Rare on the Plants of Special Concern in Pennsylvania list by the Pennsylvania Biological Survey and the Department of Conservation and Natural Resources, based on its rather localized distribution in the state and peatland habitat. It may be abundant where established

The species grows in bogs and other types of peaty wetlands.