This species is different than all others in the genus due to its lack of glands on its leaf surfaces. 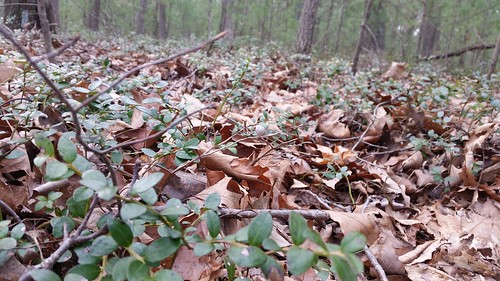 Box huckleberry (Gaylussacia brachycera) is a low shrub with branches that rise to about 30cm from underground, creeping stems, known as rhizomes. Its glossy, leathery leaves lack the resinous dots of other huckleberries, and it holds its leaves year-round while the others are deciduous. Its flowers, white or pinkish, are bell-shaped. Fruits are similar to blueberries, but have fewer, larger seeds.

Only three populations of box huckleberry have been found in Pennsylvania. One large population is well protected in a state forest natural area, another has been damaged by road construction. The third has not been seen since 1930. Studies show that germination rate is very low and seedlings are so weak they are unable to grow. Box huckleberry populations are thought to be limited to asexual reproduction by spreading rhizomes.

One box huckleberry population is protected within the Box Huckleberry State Forest Natural Area. In addition, the National Park Service has designated this area as a National Natural Landmark. State Forest rules and regulations prohibit the taking of any plant from state forest land. Wild Plant Management Permits are required prior to collecting Endangered and Threatened plant species for scientific purposes. Further roadwork is unlikely to cause more damage to the second population because the box huckleberry is listed as Threatened and, therefore, protected by regulatory agencies.