This species was commonly used medicinally be many North American Indian tribes for treatment of many issues. Bark can be used to create banages, stems and leaves can be used for sores and the plant can be used in a wash for healing aches. 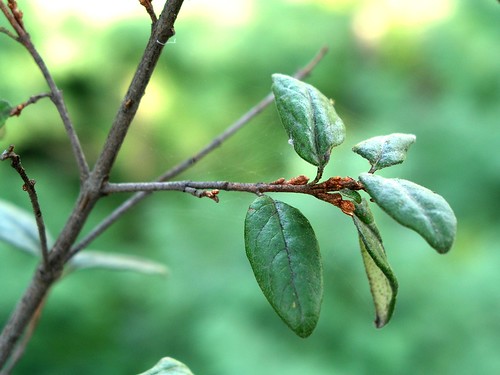 Buffalo-berry (Shepherdia canadensis) is a deciduous shrub. It is easily recognized by the opposite, entire leaves and the presence of reddish scales on the twigs and the stalks and undersurface of the leaves. The flowers are greenish, a few millimeters long, and appear in spring as the leaves emerge. The fruit is a reddish berry that can be found only on female plants. This species is related to and somewhat resembles the group of exotic, invasive shrubs known as “autumn-olive” or “Russian-olive” (genus Elaeagnus), but the latter plants have alternate leaves.

The buffalo-berry has been given a status of Endangered on the Plants of Special Concern in Pennsylvania list by the Pennsylvania Biological Survey and the Department of Conservation and Natural Resources. It is currently known from fewer than ten locations that are mostly in the extreme northwestern corner of the state.

The species grows in various types of habitats throughout its range but mostly on calcareous substrates. At the locations in Pennsylvania, buffaloberry inhabits calcareous cliffs and rocky places, usually on steep slopes overlooking streams.