This species has showy, white clusters of flowers and gives off a musky smell. 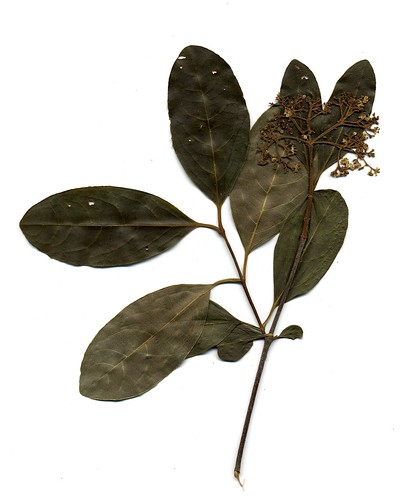 Possumhaw (Viburnum nudum) is a deciduous shrub or small tree that grows up to 4m tall. The leaves are oppositely-arranged, shiny above, toothed or untoothed on the margin, oblong to elliptic in shape, and typically 8-13cm long. The flowers, which appear in May or June, are arranged in flat-topped clusters. The small individual flowers have white petals with five regular lobes. The fruits at maturity are dark blue-black and berry-like, with a single seed.

The PA Biological Survey considers possumhaw to be a species of special concern, based on the relatively few occurrences that have been recently documented and its wetland habitat. It has a PA legal rarity status and a PABS suggested rarity status of Endangered. Fewer than ten populations, most of them with only a few individuals, are known from the state.

It grows in wetlands, particularly swamps, wet thickets, and the margins of ponds.

In Pennsylvania, it represents a southerly species and has been documented in a few southeastern counties.

This species may be impacted by deer browsing in some locations.

The viability of known populations of possumhaw and its habitat would be enhanced by creating buffers around wetlands, controlling invasive species, and protecting the hydrology of the wetland and its surroundings.