This species is distinctive for its spreading, four-petaled flowers that almost look like a dragonfly. 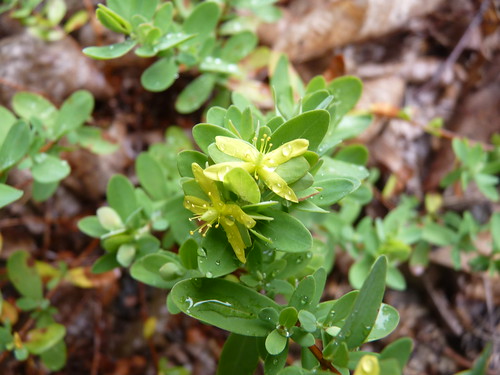 St. Andrew's cross (Hypericum stragulum) is a low-growing, deciduous shrub with erect stems up to 30cm tall. The leaves are oppositely arranged, 2-3cm long, untoothed on the margin, oval or lance-shaped and usually widest above the middle, rounded at the tip and tapered toward the base. The flowers, appearing in July and August, are bright yellow and have four narrow petals, which are about 9mm long and configured in a cross-like pattern, and are subtended by two green sepals. The fruit is a many-seeded capsule.

The PA Biological Survey (PABS) considers St. Andrew's cross to be a species of special concern, based on the few occurrences that have been recently confirmed. It does not have a PA legal rarity status, but has been assigned a suggested rarity status of Threatened by PABS. About ten populations are currently known from the state.

The populations of St. Andrew's cross in the state are threatened by human-related habitat loss, natural succession, invasive species, and indiscriminate application of herbicides.