Another common name for this species is frostweed, which comes from the fact that after a frost the stems burst with sap oozing out that freezes into ice crystal ribbons. 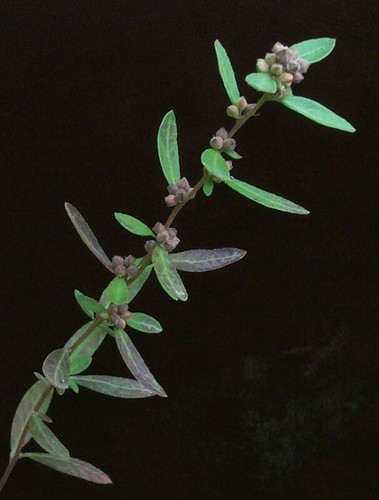 Bicknell's hoary rockrose (Helianthemum bicknellii) is a perennial herb with a slender hairy stem that may grow to about 50cm in height, but is often much shorter. The leaves are alternately arranged, linear to narrowly elliptic in shape, hairy, up to 2.5cm in length, and stalkless or nearly so. The small flowers, appearing in June and July, have five yellow petals that are about 8-12mm in length. These flowers are clustered in the axils of the leaves on the upper part of the stem, as are flowers produced later in the season that remain closed and do not have expanded petals, but do produce fruits. The fruit is a capsule containing brownish seeds that have net-like surface markings.

The PA Biological Survey (PABS) considers Bicknell's hoary rockrose to be a species of special concern, based on the few occurrences that have been recently confirmed and the specialized habitat. It has a PA legal rarity status and a PABS suggested rarity status of Endangered. Fewer than ten populations are currently known from the state.

It grows in open, rocky places that are at least seasonally dry, such as riverbed scours, exposed banks and slopes, upland woods, bedrock outcrops, and serpentine barrens.

In Pennsylvania, this species has been documented historically in numerous widespread counties.

Because of the preference of the species for relatively open habitats, active management, such as fire, mowing, or invasive species removal, may be required to maintain the proper successional stage and ecological conditions for the species to thrive. The viability of the riverine populations will require maintaining the natural hydrology of the Susquehanna River, with its seasonal fluctuations in water levels, as well as retaining the natural conditions of the shorelines and islands.