This species may become infected with an anther smut that causes the anthers to become swollen and reddish in color. 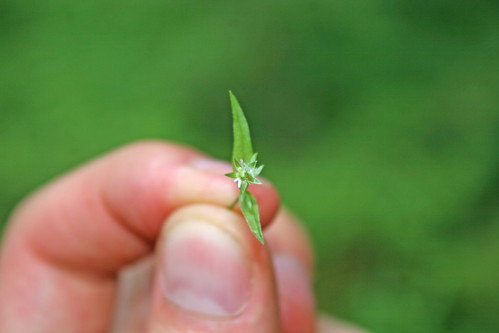 Boreal starwort (Stellaria borealis) is a small, slender, rather delicate perennial that is usually less than 45cm in height. The leaves have a lance or linear-lance shape and are oppositely arranged. The flowers are only a few millimeters long, often lack petals, and are grouped individually or in a cluster that are present from May to August. The fruit is a many-seeded capsule. Other species in the genus Stellaria have a similar general appearance and also grow in wetlands.

Boreal starwort has been given a status of Undetermined on the Plants of Special Concern in Pennsylvania list by the Pennsylvania Biological Survey and the Department of Conservation and Natural Resources, based on the relatively few historical and recent records that have been documented in the state.

The species grows in wet soil in and around seeps, springs, and streamlets in cool woods and swamps.

It occurs mainly in the northern and mountain counties in Pennsylvania.

More field work is needed in order to determine if the species should be of conservation concern. The plant is easily overlooked due to its inconspicuous appearance and wetland habitat.