Native Americans have used this species to treat wounds, warts and lung ailments. 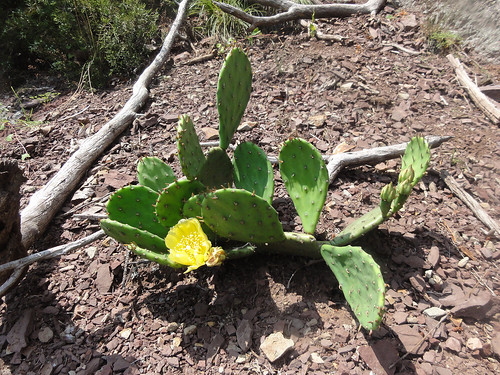 Eastern prickly-pear cactus (Opuntia humifusa) is a perennial herb forming mats or clumps. The stems are shaped into fleshy, flattened pads that are up to 10cm long and 6cm wide. The pads should be touched with caution because of the presence of minute barbed hairs that are very irritating when lodged in the skin. The leaves are reduced to spines, which may not be present on a given plant. The very attractive flowers, appearing in June and July, are bright yellow and up to 8cm wide. The fruit is fleshy, vase-shaped, red or purple at maturity, and attached along the margins of the pads.

The PA Biological Survey (PABS) considers eastern prickly-pear cactus to be a species of special concern, based on the few occurrences that have been recently confirmed and its specialized habitat. It has a PA legal rarity status and a PABS suggested rarity status of Rare. About thirty occurrences are currently documented from the state.

In Pennsylvania, it occurs scattered primarily in the southern counties, growing on dry, open, rocky ground, such as on shale barrens, slopes, and cliffs. It is also cultivated and may escape locally from these plantings.

Occurrences of eastern prickly-pear cactus and its habitat type are threatened by human-related habitat loss, natural succession, invasive species, quarrying, and the collection of wild plants by gardeners.

Because of the preference of the species for sunny conditions, active management – such as fire or invasive species removal - may be required to maintain the proper successional stage and ecological conditions. Escapes from cultivation are not considered to be of conservation significance.