This species has been used medicinally for treatment of rheumatism and hair loss. 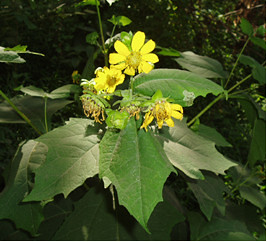 Hairy leafcup (Smallantus uvedalia) is a coarse perennial herb that can reach up to 2m in height. A member of the aster family, this species produces flower heads that look similar to small sunflowers. The leaves a quite large, up to 40cm , and are rough to the touch. The deeply lobed and coarsely toothed leaves have been said to resemble a bear's paw in outline. Leaves are arranged in opposite pairs along the stem. The flower heads are composed of a brownish-yellow center surrounded by seven to thirteen bright yellow rays. The 5cm flower heads are produced in leafy, branching clusters at the top of the stems and bloom from July to September.

The PA Biological Survey considers the hairy leafcup to be a species of special concern, based on the relatively few occurrences that have been confirmed and the localized distribution. It has been assigned a rarity status of Threatened.

In Pennsylvania, it grows in ravines, moist thickets, and along the banks of streams or rivers.

Protection of hairy leafcup will require maintenance of known populations and preservation of stream and riverbank habitat. This may include sustaining appropriate hydrology, removal of invasive plants, and establishment of buffers that can moderate the effects of scouring events and run-off. Management of the known sites requires long term monitoring of populations.