The root of this species is a blood tonic that can be used to regular menstration, relieve pain post childbirth or treating stomach bleeding or aches. 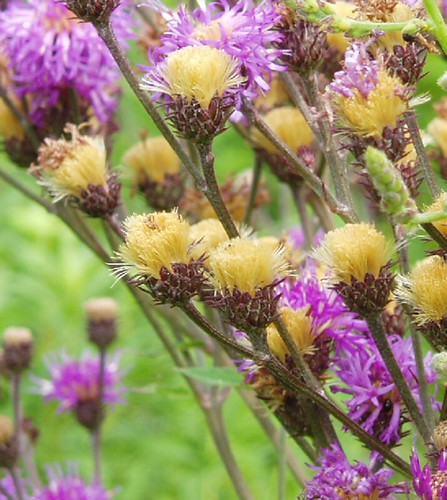 Tawny ironweed (Vernonia glauca) is a perennial herb that may grow to 1.5m in height. The leaves are alternately-arranged, narrowly egg-shaped to oblong in shape, noticeably paler below, with short-pointed tips and bases that taper to a short petiole. The flowers, which appear from July to October, are purplish and are grouped into dense flowering heads, which are clustered at the top of the stem in a branched, flat or roundtopped grouping. This species has lighter-colored bristles at the top of its fruits than does the much more common species Vernonia noveboracensis.

The PA Biological Survey considers tawny ironweed to be a species of special concern because of the few occurrences that have been recently confirmed. It has a PA legal rarity status and a PABS suggested rarity status of Endangered. Fewer than ten populations are currently known from the state.

It grows in successional clearings, dry fields, and upland forests.

In Pennsylvania, it reaches a northern limit of its range and has been documented in a few southeastern counties.

The currently known populations of tawny ironweed in the state are threatened by human-related habitat loss, natural succession, invasive species, and the indiscriminate spraying of herbicides.

Given the preference of the species for open habitats, active management is usually required to maintain the proper successional stage.