This species is one of only a few plants that exhibits crystallofolia - a unique ribbon-like ice formation appearing during a frost event. 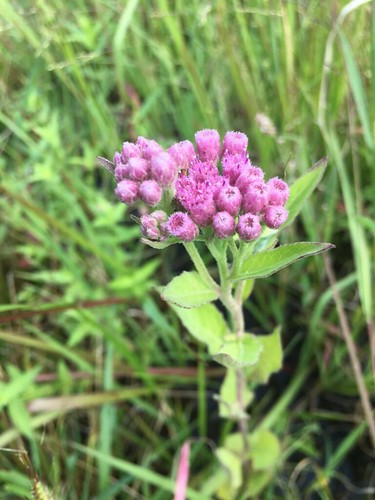 Sweetscent (Pluchea odorata) is an annual herb with a more-or-less hairy stem that may reach 1m in height, but may be much smaller. As the name implies, the entire plant has a camphor-like aroma and is somewhat sticky or greasy to the touch. The leaves are alternately arranged, lance-shaped to eggshaped, from 4-15cm in length and 1-7cm in width, stalkless or short-stalked at the base, pointed at the tip, often somewhat hairy on both surfaces, and usually toothed on the margin. The flowers, appearing from August to October, are pinkish to purple and are grouped in a cluster at the top of the stem.

The PA Biological Survey (PABS) has assigned sweetscent a proposed rarity status of Endangered, but has concentrated on identifying locations where the species is occupying relatively natural habitats, and has given a lower conservation priority to populations inhabiting disturbed sites.

Sweetscent grows in natural coastal wetlands, but may also be found in disturbed ground, such as damp clearings, openings, ditches, and along roads.

The more natural habitats have threats from exotic species, dredging and filling, and water pollution.