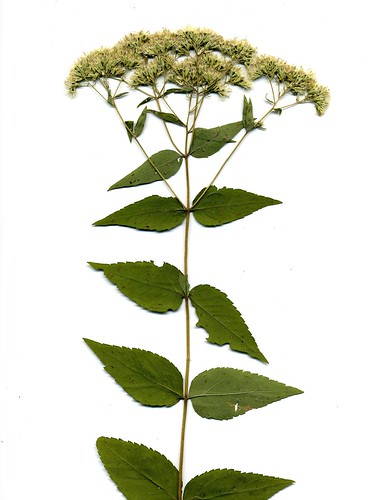 Godfrey's throughhwort (Eupatorium godfreyanum)  is a perennial herb with hairy stems that may grow from 60cm to 1.5m  high. The leaves are oppositely arranged, generally lance-shaped, 7-11cm long, toothed on the margin, pointed at the tip, and attach directly to the stem without a stalk. The flowers, appearing from August to October, are grouped into small flower heads and are arranged in branched, open clusters at the top of stems.

The PA Biological Survey (PABS) considers Godfrey's throughwort to be a species of special concern, based on the few occurrences that have been recently confirmed. It does not have a PA legal rarity status, but has been assigned a suggested rarity status of Threatened by PABS. Only a few occurrences have been documented in the state.

It grows on dry slopes, woodland borders, and clearings.

In Pennsylvania, it has been documented historically in a few eastern counties, particularly those bordering the
Susquehanna River.

Populations of Godfrey's throughwort have threats from natural succession, invasive species, and the indiscriminate application of herbicide.

Given the preference of the species for open habitats, active management - fire, mowing, or invasive species removal - may be required in order to create the proper successional stage and ecological requirements for the species to thrive.