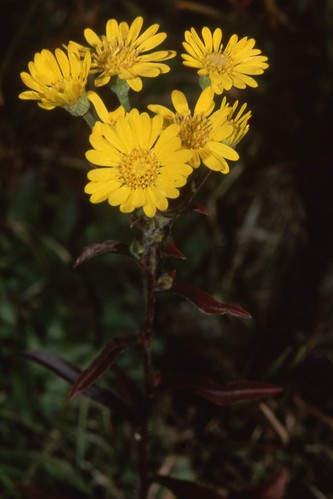 Golden aster (Chrysopsis mariana) is a perennial herb that that grows from 30-80cm tall. The stem is hairy when young but becomes more-or-less hairless later. The leaves are lance-shaped to elliptic, hairy at least when young, and tend to decrease in size up the stem. The yellow flowers, appearing from July to October, occur in flowering heads that are about two and a half centimeters wide. The base of each flower-head is surrounded by sticky green bracts.

The PA Biological Survey (PABS) considers Golden aster to be a species of special concern, based on the few occurrences that have been recently confirmed. It has a PA legal rarity status of Threatened and has been assigned a suggested rarity status of Endangered by PABS. About ten populations are currently known in the state.

In Pennsylvania, it is near a northern border of its range, and has been documented historically in a few southeastern counties.

Existing populations of Golden aster are threatened by natural succession, invasive species, and the indiscriminate application of herbicide.

Given the preference of the species for relatively open habitats, active management – such as fire, mowing, or invasive species removal – is often required to maintain the proper successional stage at sites where it grows.