Many insects are attracted to this plant including butterflies, long and short-tongued bees, wasps, flies, skippers, moths, and beetles. 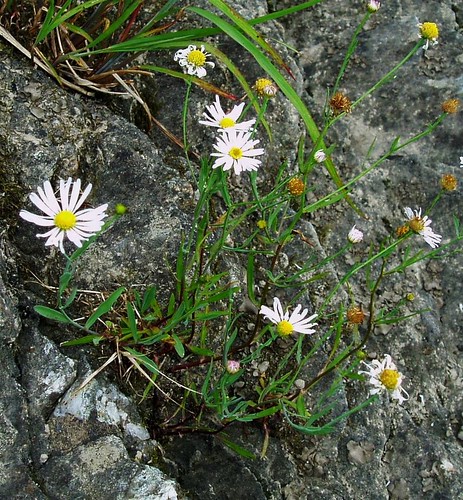 Aster-like boltonia (Boltonia asteroides) is a perennial herb with a hairless, often branched stem that can grow to about 1m tall. The leaves are alternately arranged, untoothed, hairless, broadly linear to lance-shaped, up to 15cm long, and tend to get smaller in size going up the stem. The flowers, appearing from July to October, consist of daisy-like flowering heads about 12mm wide with surrounding white or pinkish ray florets.

The PA Biological Survey (PABS) considers the aster-like boltonia to be a species of special concern, based on the very few occurrences that have been recently confirmed and its very specialized habitat. It has a PA legal rarity status and a PABS suggested rarity status of Endangered.

In Pennsylvania, it has been documented historically along the lower Susquehanna River and also in Erie County.

Only a few populations along the lower Susquehanna River are currently known. Invasive species represent a threat to this species and its habitat.

The viability of populations of aster-like boltonia and its habitat depends on maintaining the natural hydrology and natural condition of the shoreline and islands of the lower Susquehanna River. The species appears well-adapted to the seasonal fluctuations in water levels, especially the lower water levels of summer and fall when the plant is flowering and fruiting.