Unlike other Bidens species, the seeds of swamp beggar-ticks, while still dispersed by hooking into animal fur and feathers, are specialized for short-distance transport. 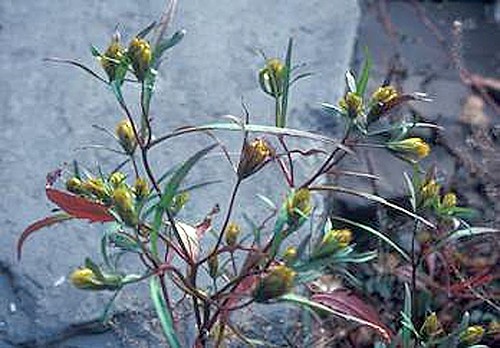 Swamp beggar-ticks (Bidens bidentoides) is an annual herb that can grow up to 1m in height but is often smaller. The leaves are oppositely arranged, lance-shaped, from 4-10cm in length and 2cm in width, pointed at the tip, stalked at the base, and variably toothed on the margin. The flowers, appearing from August to October, have a yellow central disk and lack the conspicuous yellow ray flowers found in other species of the genus Bidens. The small individual fruits, only about a centimeter in length, have two slender barbed projections that aid in dispersal.

The PA Biological Survey (PABS) has assigned swamp beggar-ticks a rarity status of Endangered, based on the limited global and state range, the relatively few populations that have been confirmed, the small population sizes, and the very specialized habitat.

Swamp beggar-ticks grows in intertidal marshes, mudflats, and shores. The plants have a tendency to root on decaying wood, such as pieces of driftwood and old piers and boat docks.

In Pennsylvania, it occurs on the edge of its range, and has been documented historically in a few southeastern counties along the Delaware River.