This species can rapidly colonise overgrazed pastures, making it difficult for livestock to move throughout and reduce productivity and carrying capacity of these pastures. 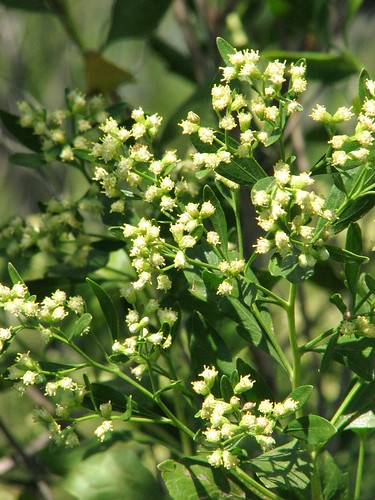 Eastern baccharis (Baccharis hamimifolia) is a slender shrub growing 2m or more in height. The stems are hairless and angled. The leaves are alternately arranged, short-stalked, up to 6cm in length and 4cm in width, usually widest at or above the middle, coarsely toothed or less frequently not toothed on the margin, thickish in texture, and typically somewhat greasy or resinous to the touch. The flowers, appearing in September and October, are whitish and arranged in clusters at the top of the stem. Male and female flowers occur on separate plants, with the female plants being conspicuous when fruiting.

The PA Biological Survey (PABS) has assigned eastern baccharis a rarity status of Rare, in order to balance the relatively few populations that have been documented and the small state range with the relative adaptability of the species in being able to colonize disturbed habitats and thus not appearing to be endangered or threatened with extirpation.

Eastern baccharis grows in natural coastal wetlands, but also thrives in certain types of drier disturbed ground, such as clearings, railroad grades, and along highways where there has been considerable road salt application.

In Pennsylvania, the species occurs at the
edge of its range, and it has been documented historically in several southeastern counties. It also sometimes occurs farther inland, particularly along major highways.

Natural habitats are threatened by exotic species, dredging and filling, and water pollution.

The conservation of the species in Pennsylvania has concentrated on identifying populations that grow in more natural habitats as compared with those found in disturbed sites.