The common name for this species comes from its rough textrued stems. 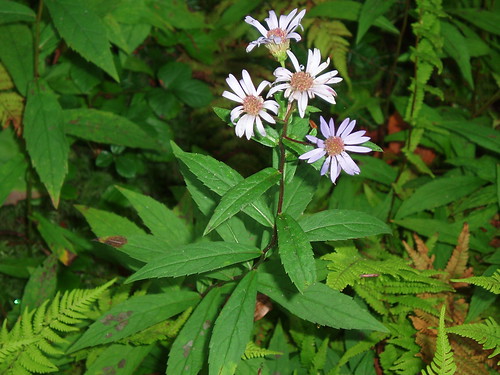 Rough aster (Eurybia radula) is a perennial herb with a stem that can grow up to 1m tall. The leaves are alternate, lance-shaped, strongly veined, toothed on the margin, rough to the touch, stalkless, and up to 11.5cm long. The flowers, appearing from August to October, are arranged in a small cluster of daisy-like flower heads at the top of the stem. Each flower head contains many yellow disk florets that are surrounded by fifteen to forty purple to white ray florets.

The PA Biological Survey (PABS) considers rough aster to be a species of special concern, based on the few occurrences that have been recently confirmed and its wetland habitat. It does not have a PA legal rarity status, but has been assigned a suggested rarity status of Threatened by PABS. About thirty populations are currently known.

It grows in wet woods, swamps, seeps, bogs, and along streams.

In Pennsylvania, it has been documented historically mostly in the southern counties.

Excessive browsing by deer may be a threat in some locations.

The viability of known populations of rough aster and its habitat may be enhanced by creating buffers around wetlands, controlling invasive species, and protecting the natural hydrology surrounding wetlands.