The leaves of this species have been used to make tea to alleviate measles, colds, the flu and pneumonia. 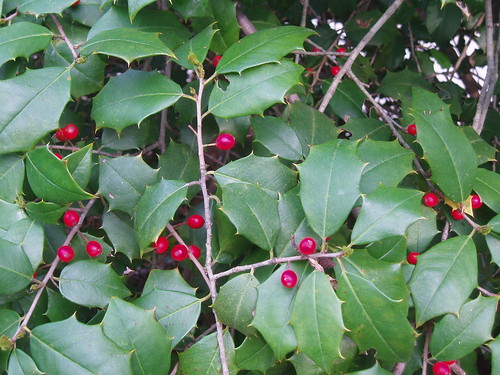 American holly (Ilex opaca) is an evergreen shrub or small tree that grows to 15m in height. It can be easily recognized in any season by its alternately arranged, thickish, evergreen leaves that have a sharp spine at the tip and additional spines along the margin. The flowers, appearing in May and June, are unisexual, so that the familiar berry-like fruit, red at maturity, can be found only on female plants.

The PA Biological Survey (PABS) considers American holly to be a species of special concern, based on the relatively few native occurrences that have been recently confirmed. The species has a PA legal rarity status and a PABS suggested rarity status of Threatened.

The species grows on wooded slopes and streambanks. It has also been grown as an ornamental, particularly in the southeastern counties, and may escape locally to woodlots, thickets, and fencerows.

In Pennsylvania, it is near the northern end of its range, and occurs mostly in the southeastern counties.

The conservation of American holly in Pennsylvania has concentrated on protecting populations that are believed to be indigenous and that represent native genotypes. Occurrences of the species that have resulted from escapes from plantings are of uncertain genetic origin and are considered to be of much lower conservation significance. As a woodland species, proper forest management and control of invasive species are important for the long term viability of American holly. Gathering of the branches of wild trees for winter decoration should be discouraged.