Many species within this family produce two kinds of flowers - those that have open flowers, which can be pollinated by insects, and those that don't open, which must self-pollinate. 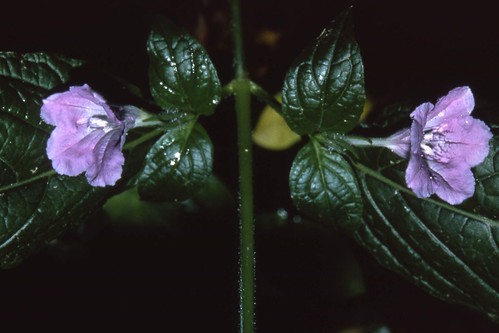 Limestone petunia (Ruellia strepens) is a perennial herb with hairy-lined stems that can reach 1m in height. The leaves are oppositely arranged, oval to lance-shaped, variable on the margin and in hairiness, and up to 15cm long and 6cm wide. The flowers, appearing from late June through late July, occur singly or in small clusters in the leaf axils. The blue to purple petals are 3-5cm long, with a tube-like base and five spreading lobes above. The fruit is a hairless capsule with many seeds.

The PA Biological Survey (PABS) considers limestone petunia to be a species of special concern, based on the relatively few occurrences that have been recently confirmed. It has a PA legal rarity status and a PABS suggested rarity status of Threatened. About thirty-five populations are currently known from the state.

It grows on wooded hillsides, floodplains, and streambanks, especially on calcareous substrates.

Invasive species and quarrying represent threats at some locations.

The viability of populations of limestone petunia and its habitat can be enhanced by maintaining forested conditions on floodplains and streambanks.