This community occupies the cobble, sand, and gravel shores from the normal water line to the upper limit of winter storms. The substrate is very unstable and subject to wave action and ice scour. The vegetation is sparse (usually less than 25% total cover). The most characteristic species are American beachgrass (Ammophila breviligulata), sea-rocket (Cakile edentula), Canada wild-rye (Elymus canadensis), silverweed (Potentilla anserina), and cocklebur (Xanthium strumarium).

This sparsely vegetated community is distinguished from the Great Lakes Palustrine Sandplain by substrate, vegetation, and geographical location. The Lake Erie Sparsely Vegetated Shore is primarily cobble substrate, nearly devoid of vegetation, and is found along the entirety of the Lake Erie Shore. The Great Lakes Palustrine Sandplain is found primarily on the Presque Isle Peninsula, is sandy, and is more densely vegetated as these sites are more protected from wave and ice scour than the Great Lakes Sparsely Vegetated Shore.

The Periodically Exposed Shoreline Community, which differs from this type in geographic location, is found along river, creek, and lake margins in Pennsylvania; the Great Lakes Sparsely Vegetated Shore is limited to the Lake Erie Coast.

There is limited Lake Erie shoreline in Pennsylvania. The Lake Erie shoreline is a combination of cobble, bedrock, sand and gravel. The Presque Isle Peninsula, a sand-spit that extends into Lake Erie, is one of the only areas where sand is the dominant substrate. Sand beaches are also present at the mouths of the larger creeks flowing into Lake Erie. The Great Lakes Sparsely Vegetated Shore supports a wide variety of plant species, some unique to shoreline areas of the Great Lakes, including American beachgrass (Ammophila breviligulata), sea-rocket (Cakile edentula), beach pea (Lathyrus japonicus), and silverweed (Potentilla anserina).

The greatest threat to the cobble shorelines of the Great Lakes Sparsely Vegetated Shore is from lake shore development and continued impeding of sand migration along the shore. Recreational use is also a major threat to the plants and animals of the Lake Erie Shore. Presque Isle State Park is a popular destination for tourists and receives millions of visitors each year. Beach grooming and foot traffic reduce the amount of habitat available to plants on the small beaches at the mouths of creeks. Non-native plants, such as crown-vetch (Coronilla varia) and Japanese knotweed (Fallopia japonica) may invade some areas.

Shoreline stabilization efforts have altered natural erosion and deposition processes that develop the lake shoreline. The shoreline development is part of the long-term physical process that creates the sandplain habitat behind the leading dune. The jetty at Conneaut, Ohio is a large obstruction to the natural flow of sediments. Recreation is a major focus of management at Presque Isle State Park and other sites along the Erie Coast. Control of non-native plant species are also important for managers at Presque Isle State Park.

Insects, including beetles and lepidopterans, may form a substantial part of the biodiversity of these communities. Open gravel and cobble areas along the coast should be inventoried for rare plants and animals, especially insects.

Long-term management of the Erie Shoreline could benefit from a better understanding of the natural erosion and deposition processes, as well as how these processes may be affected by artificially created barriers such as breakwaters and jetties. 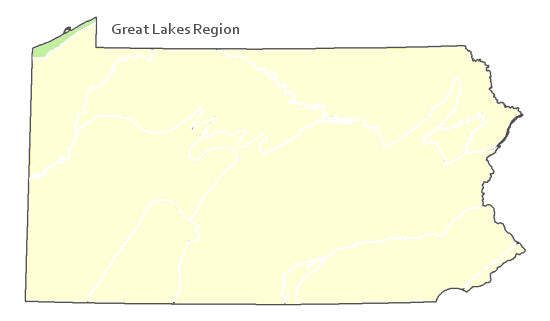 Northeastern Ohio to New York along the southern shore of Lake Erie.