This forest type is limited to the 5—6 mile wide strip of Atlantic Coastal Plain that extends along the Delaware Estuary in southeastern Pennsylvania. Proximity to Philadelphia has resulted in urbanization and suburbanization of much of the coastal plain, leaving little of the original natural vegetation. The largest remaining examples are the 239-acre Delhaas Woods Preserve which encompasses several coastal plain forest types and the 285-acre Five Mile Woods Preserve. Other tracts are fragmented and highly vulnerable to invasion by non-native, invasive species.

None; this type is new to the Pennsylvania Plant Community Classification developed from inventory studies of Bucks County by Morris Arboretum.

Already limited in extent, occurrences of Sweetgum - Willow Oak Coastal Plain Palustrine Forest patches are threatened by activities that lead to further fragmentation and changes to the hydrological character. Most occurrences are threatened by invasive species, especially mile-a-minute (Persicaria perfoliata) and common reed (Phragmites australis), and over-browsing by white-tailed deer.

All areas of natural vegetation adjacent to existing coastal plain preserves should be protected to prevent loss of habitat and/or fragmentation.

Remaining sites should be monitored for deer browse impact which appears to be increasing. A better understanding of the hydrology would be helpful in designing protection strategies. 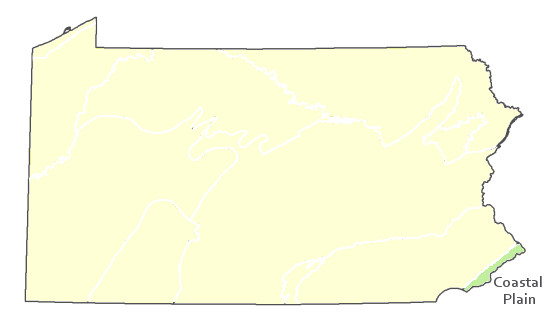 Southeastern strip of Bucks County parallel to the Delaware River