The leaves of this species are typical of most sedges, but the dark brown color of its mature spikelets make the species showy in early summer. 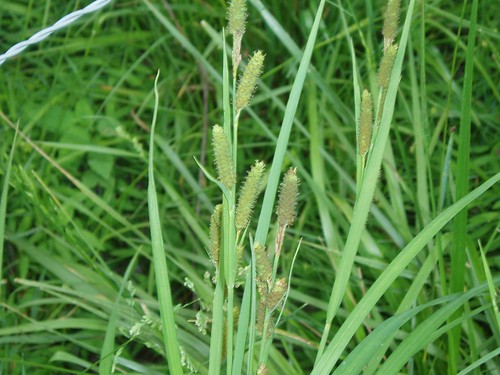 Short's sedge (Carex shortiana) is a tufted, perennial, grass-like plant that can reach from 20cm to 1m in height. Its tall flowering stems are light green, hairless, and three-sided, particularly near the base. The leaves grow from the base and alternately along the stems. The smooth, leaf blades are up to 30cm long and one centimeter wide. Blades are often indented along the central vein, which gives the leaf a channeled appearance. The flowers are held in densely packed, cylindrical spikes that become dark brown as they mature. Clusters of three to six spikes are produced at the top of each flowering stem. The lower spikes usually contain all female flowers while the upper spikes have female flowers at the top and male flowers below.

The PA Biological Survey considers Short's sedge to be a species of special concern, based on the relatively few occurrences that have been confirmed and its relatively infrequent wetland habitat. It has been assigned a rarity status of Rare.

It grows in calcareous wet meadows and swamps or in rich woods.

Throughout the range of this species, habitat loss, land conversion for development, and displacement by invasive species have all played a part in its decline. Its wetland habitats are also sensitive to habitat fragmentation and changes in hydrology that could alter water levels or chemistry.

Maintenance of known populations and preservation of the communities where Short's sedge grows will be crucial to its survival. Creating buffers around fragmented habitat and removal of invasive species will help to maintain populations and encourage new population growth. The management of the known sites requires long term monitoring of populations. Potential sites for restoration should be evaluated.