This species is the smallest of the trilliums and it is one of the earliest wilflowers to bloom in woodland areas. 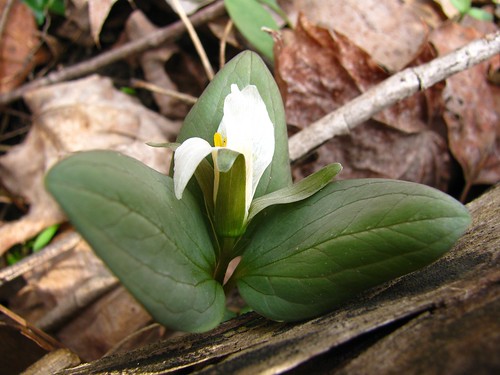 Snow trillium (Trillium nivale) is a small member of the lily family, growing only up to 15cm tall. Its structure is very simple: a single stem rises from a short, thick rhizome (underground stem) to a single whorl of leaves, then a single flower. The seeds bear fatty elaiosomes, which attract ants to carry seeds away from the parent plant. Individual plants may live more than eight years.

Threats to snow trillium include habitat destruction by logging and quarrying, grazing in the Midwest, and competition from invasive species in some areas. Its populations are often small and widely scattered across its range.

Snow trillium can most benefit from preservation of undisturbed habitat, with consideration given to save areas large enough for population expansion. Control or removal of invasive exotic competitors will also help.