This whole plant is toxic - it is poisonous if ingested. 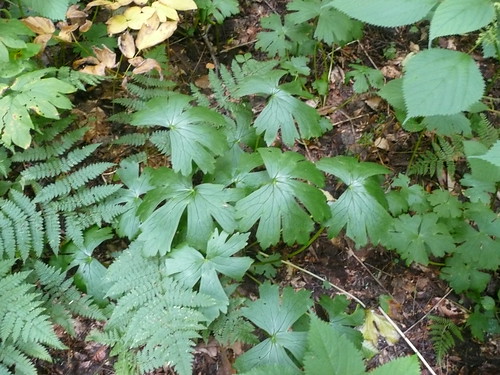 White monkshood (Aconitum reclinatum), a member of the buttercup family, is a perennial herb with a delicate stem. It grows as tall as 1m, trailing along the ground or leaning against surrounding vegetation.

White monkshood grows in moist areas along streams, in coves, or in seeps within mixed forests at high elevation.

Though white monkshood recovers well when protected, it is threatened by logging activity and may be disturbed by draining or filling of its wetland habitats. It is also sensitive to overgrazing by cattle or deer. In Pennsylvania a fungus has been discovered attacking the plants before they can produce fruit.

A. reclinatum seems to benefit from deer exclusion. In 1993 an exclusion experiment fenced off one of the Pennsylvanian populations of the plant, and it grew from one plant to five in two years' time. Preservation of wetlands and maintenance of buffer areas along streams will provide the species with more habitat.