The flowerheards of this species are made up of densely packed and rosey pink tubularflowers that have purple stamens. 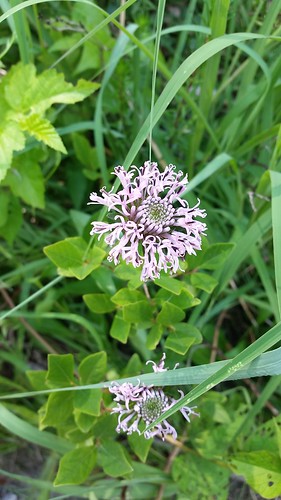 Barbara's buttons (Marshallia grandiflora) is a 20-90cm perennial herb growing singly or in clusters from a low caudex, or woody base.

Barbara's buttons grows in wet forests or meadows and on stream banks throughout central Appalachia – from Pennsylvania south to Tennessee. Historically, it also grew in North Carolina, but it seems to have been extirpated from that state; it is expected to occur in Maryland, but no populations have been documented. It tolerates partial shade, but flowers best in direct sunlight, and is most commonly found in habitat that has been scoured by flooding.

Barbara's buttons is known to occur in only eleven watersheds within its range, and many of these watershed-wide occurrences are really collections of several very small, widely scattered populations. A few watersheds in West Virginia have populations totaling in the thousands, but these are threatened by flood control projects.